My Baked Donut Holes Recipe is made in a mini muffins pan for a perfectly sized bite. The donuts are then brushed with melted butter, rolled in cinnamon sugar, and drizzled with a vanilla cream cheese glaze! Pure lush! You aren’t going to want to stop eating these delicious baked donut holes.

There’s something about bite-size donut holes that’s irresistible! And while these are baked, so they’re technically not the inside hole of a regular donut, I promise you they’re just as DELICIOUS and pillowy!

Yes, I am too excited about this recipe. It seems like forever since I’ve done a nice sweet treat on the blog, and it’s much needed— on the blog and in life! 🙂

The batter for these baked donut holes comes together quickly in a bowl and whisk. It bakes in a mini muffin pan for 12 minutes.

You’d probably think they’re divine once they’re out of the oven, but once you brush them with butter, dip them in cinnamon sugar and finally, vanilla glaze them…OMG divine is not a word anymore. They’re pure lush!

There’s something about bite-size everything that’s irresistible for me. If I could, I would never have a huge plate of anything. Just bite sizes of everything.

The truth is, bite-size foods are MUCH easier and faster than you might think.

Here’s the deal. A bit of extra prep time at first saves you SO much at the end. You save on baking and cooking time which is totally worth it!

Let’s start with these donut holes. You’ll make a simple quick bread batter, similar to any muffin batter. Then you’ll scoop the batter into a mini muffin pan.

This is the tiny bit of extra prep work for the recipe. And as a result, the donut holes bake in 8-10 minutes versus 18-20 minutes if they were regular size. So you spend a little bit of extra time filling the pan, but you get to eat the delicious baked donut holes faster. That’s a no-brainer.

These donut holes are seriously fluffy, tender, and super moist as they are right out of the oven. So don’t feel like you have to put the cinnamon sugar or vanilla glaze on them. It’s optional.

But if you want the ultimate baked donut experience, I recommend you do it! Your baked donuts will turn into a real divine treat, not just a fluffy bite size muffin. So close your eyes and trust your heart with it.

When the donut holes start to cool, brush the tops with melted butter.

Now dip them in a cinnamon sugar mixture. You can of course brush and dip the entire donut, but that would almost 100% make me feel too guilty lol. So let’s just go for the tops.

Then make a nice vanilla cream cheese glaze and give your baked donut holes a faint drizzle. And yes. Bite away! Pure bliss!!!

For the glaze, I used my good old vanilla Cream Cheese Icing. So it tasted close enough to a cinnamon roll. YUM.

You’ve probably noticed I have a thing for cinnamon rolls, I even started the blog with a Cinnamon Rolls Muffins recipe. Now I’m adding cinnamon sugar love to my baked donut holes recipe! Make some and enjoy.

To make a nicely balanced cinnamon and sugar mixture, use 2/3 cup of sugar and 1 tablespoon of ground cinnamon. I usually just put both ingredients in a cereal bowl and stir it up with a fork. If you are cooking with kids, you could seal the mixture in plasticware or a plastic zipper bag and have them shake it up! Shaking ingredients together adds kid-style fun to any recipe. 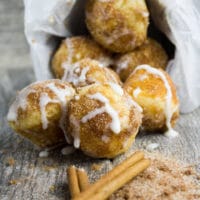 These Baked Donut Holes are made in a mini muffins pan, then brushed with melted butter, rolled in cinnamon sugar and drizzled with a vanilla cream cheese glaze! Pure lush!