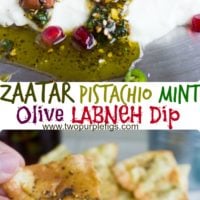 You simply cannot miss out on this Labneh. It’s a Labneh Dip with Zaatar Pistachio Mint Olive Topping! Sprinkled with fresh pomegranate seeds and served with pita chips – this easy labneh recipe is the perfect appetizer or can be served as part of a mezze platter drenched in Moroccan Olive Oil. 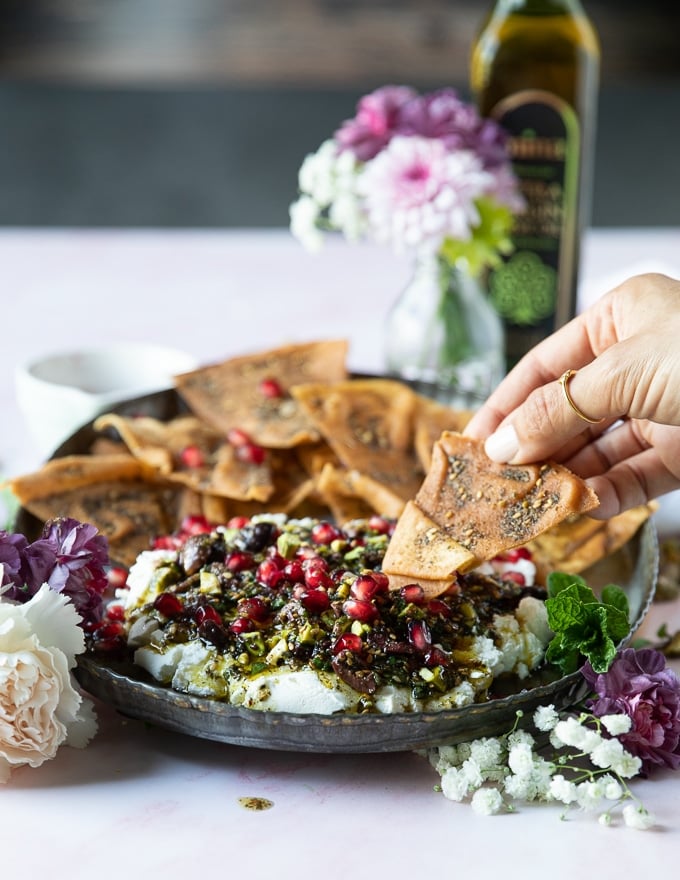 This Labneh Dip is the best, most flavorful and lightest way to dip! It’s creamy and smooth with a flavor packed Toppings and homemade Zaatar chips. Sharing this recipe today in partnership with my friends at MINA – Suppliers of authentic Moroccan Olive oil and products.

Here’s a quick video about the labneh recipe and let’s break down the post into key topics. The labneh making, the labneh recipe, the zaatar pita chips and my favorite Mina Moroccan Olive Oil to top labneh.

Aside from Labneh and how lovely it is, I need to also mention that this Whipped Feta dip is life changing!! Must try!

This easy refreshing Labneh Recipe is made overnight but it keeps in your fridge for a month. While there are so many ways to enjoy Labneh, even just plain, I prefer a rich toping. 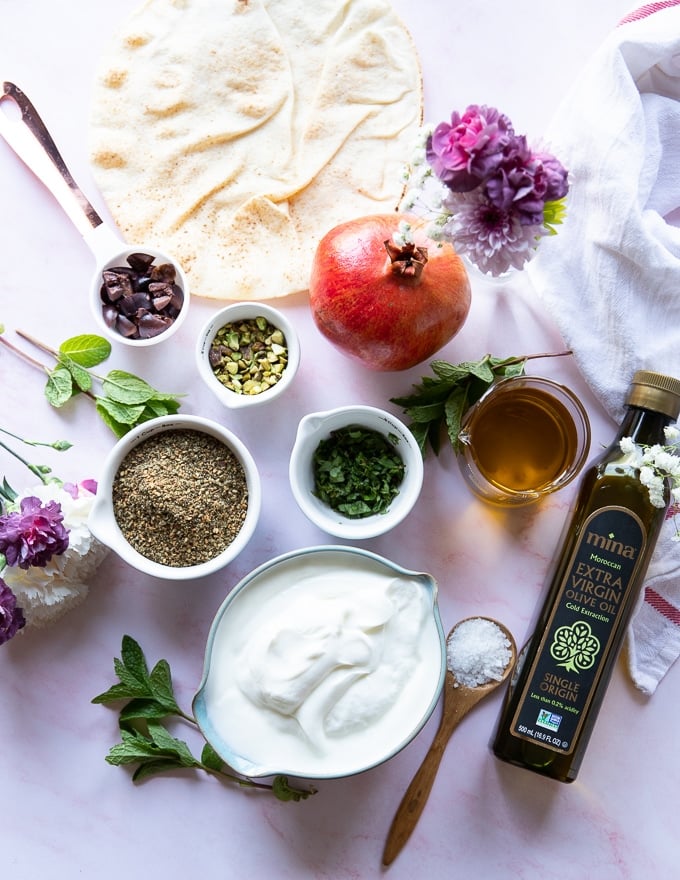 So I top this recipe with a Zaatar Pistachio Olive Mint topping. Once you try this recipe, you’ll know why it’s SUPER popular on Pinterest!  So much flavor,  freshness and punch to a classic Middle Eastern appetizer.

There’s something special a silky smooth tangy labneh contrasted with fresh mint, salty olives, crunchy pistachios, sweet pomegranate and rounded up in plenty of zaatar and Moroccan olive oil! OMG, seriously you can not miss this labneh recipe! 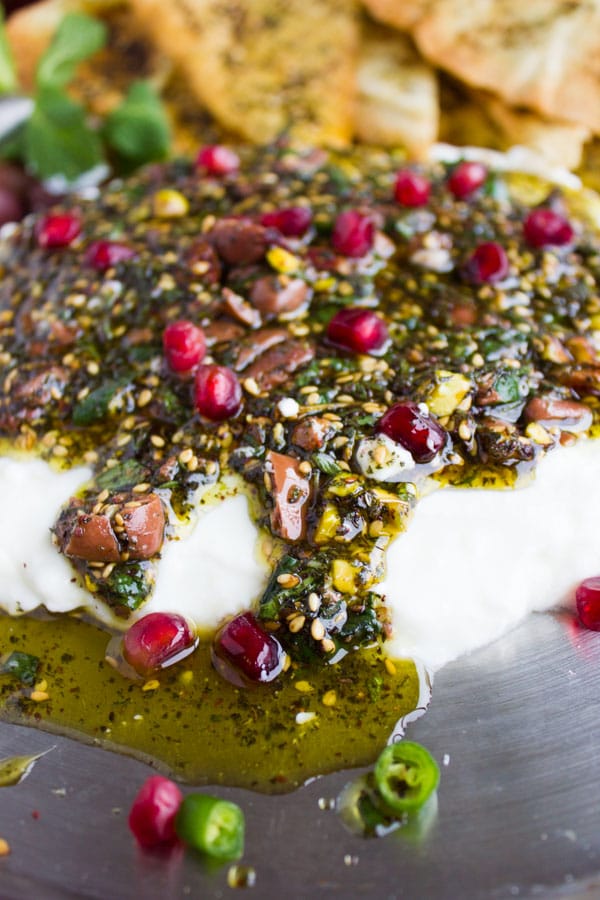 So have you ever tried labneh or at least heard of it??!! It’s a popular condiment/cheese in Turkey and the Middle east which is now becoming ever so popular in the US as well!

Labneh is a thick tangy paste like cheese that’s either made from scracth or made the easy way (below) using strained yogurt.

It has the texture of dry sour cream or Greek yogurt, but it has a more tangy and saltier taste. You can find ready made labneh at Middle Eastern stores, and you can absolutely make it from scratch. Here’s how.

HOW TO MAKE LABNEH

If you’re in the mood for making labneh from scratch, it’s super easy. 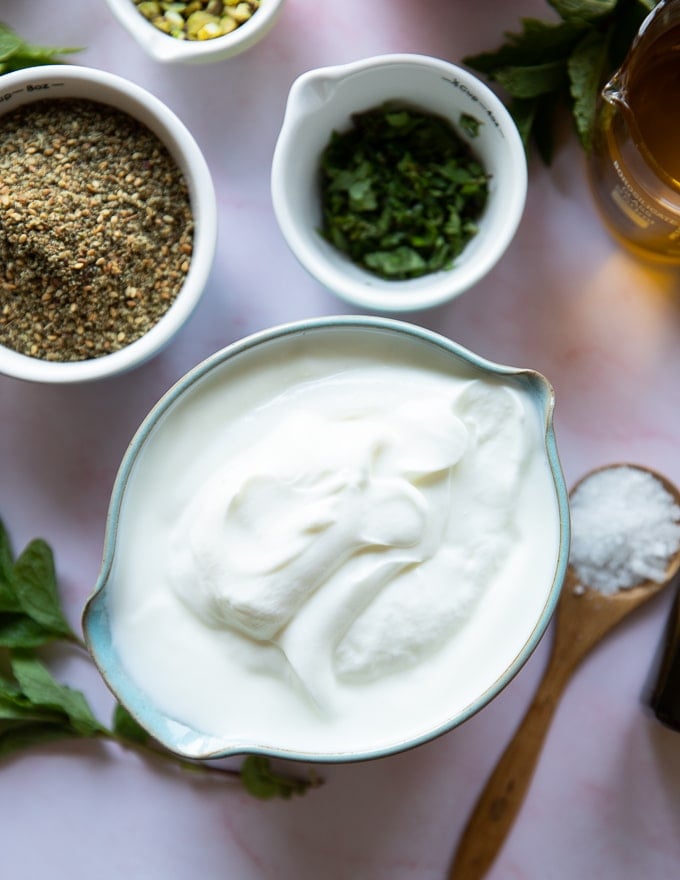 Start with the Yogurt. Any type of quality yogurt works, Greek or not. Make sure it’s your favorite type though because that’s how your Labneh will taste eventually.

Next you’ll be straining the yogurt to remove any moisture out. 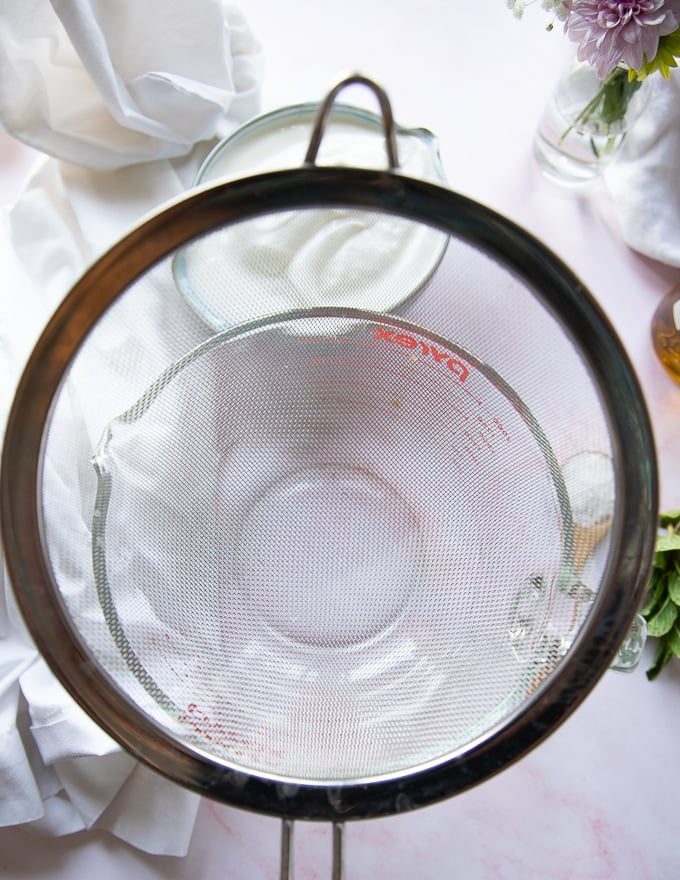 For that you have two options. 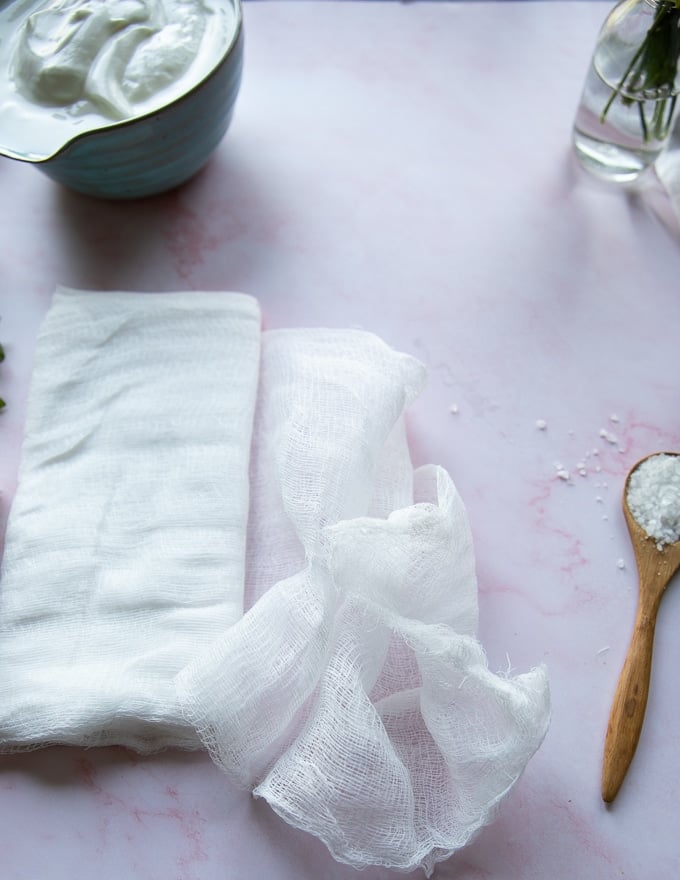 Use a cheese cloth to strain the yogurt over a sieve. 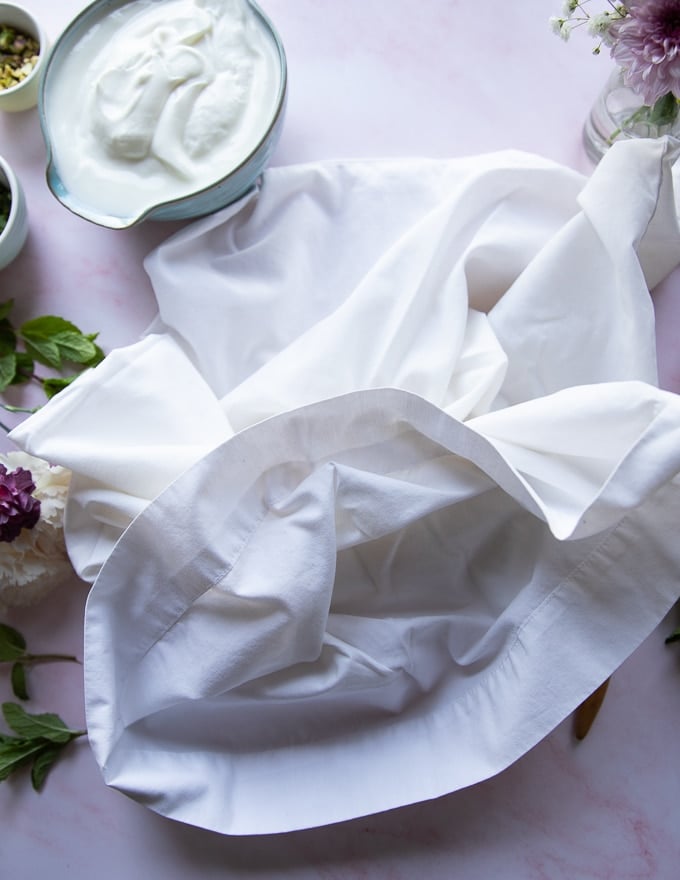 Or better off: use a pillowcase. YES. A pillowcase does wonders in Labneh making! I learned this trick from a professional Labneh maker on instagram 🙂 Make sure the pillowcase is cotton! 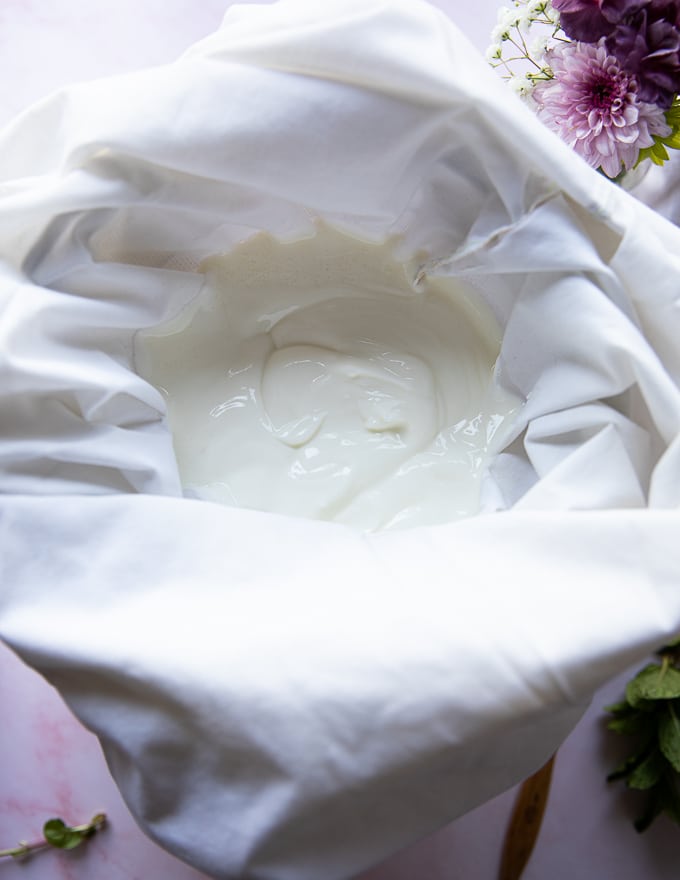 Simply pour the yogurt mixed with a 1/4 teaspoon of salt over the pillow case. Squeeze it out as best as you can to remove any moisture from the yogurt. 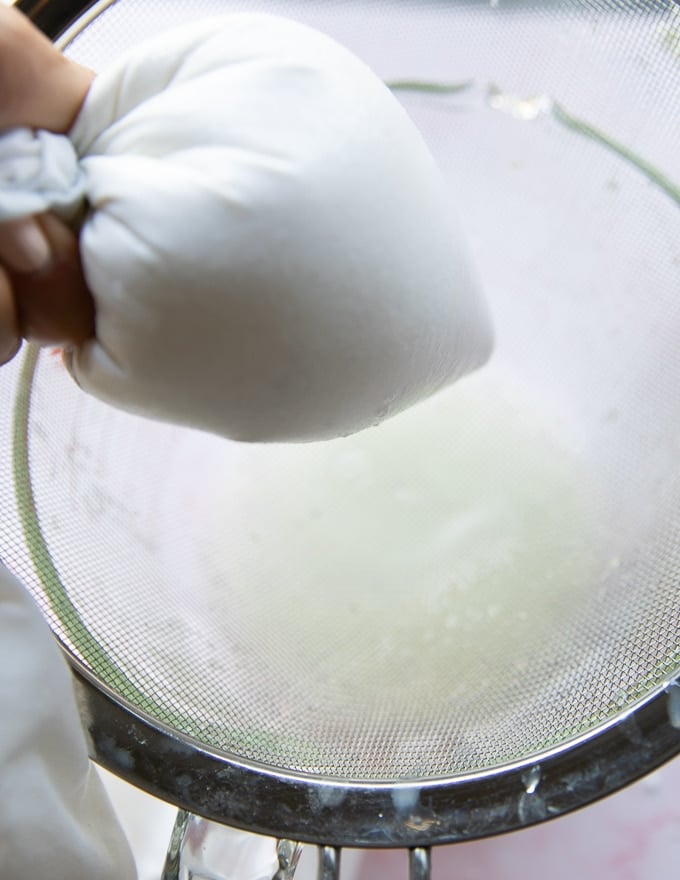 Place the pillowcase with squeezed yogurt over the sieve overnight in the fridge squeezing as often as you can. 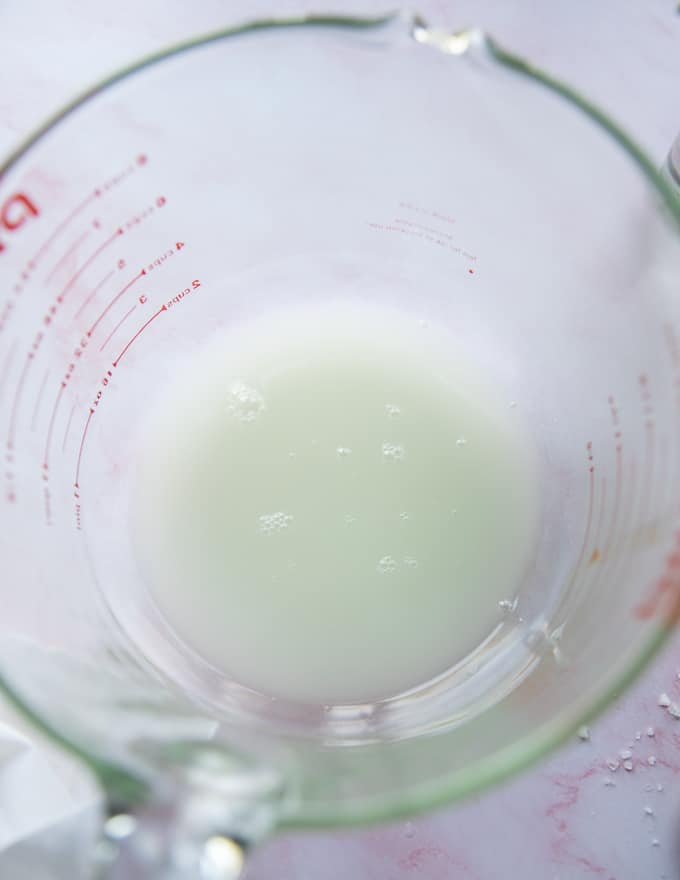 Now remove the sieve and you’ll have the excess water, which you don’t need so discard that. 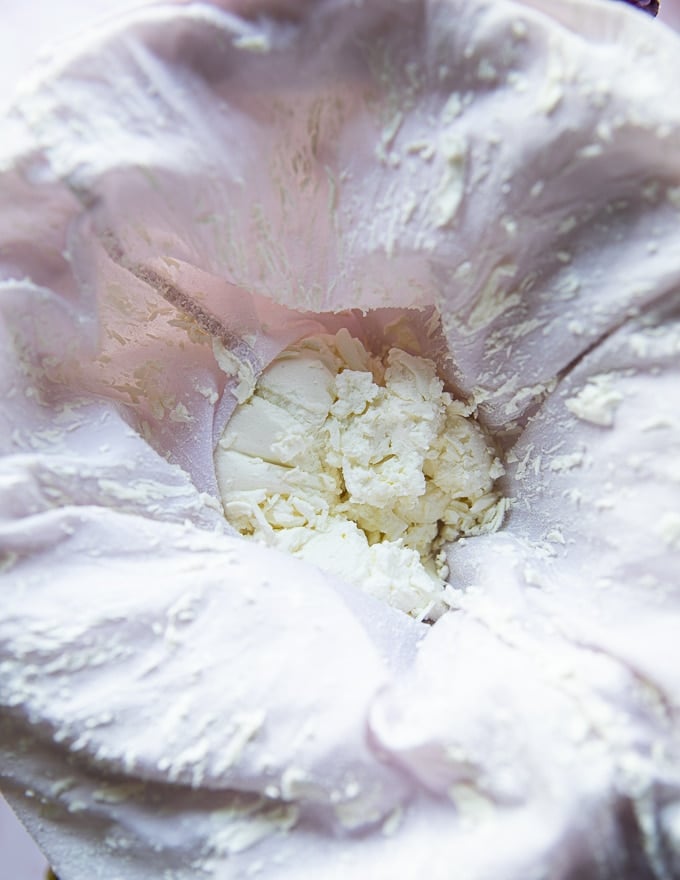 You’l find that your yogrut has turned into a dry thick creamy paste like tangy cheese called Labneh! 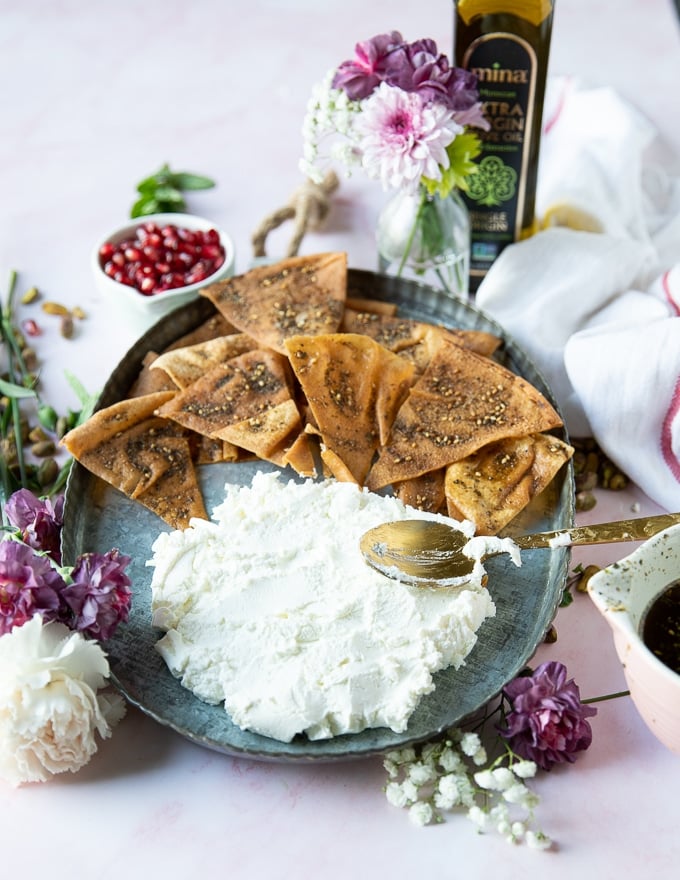 Depending on the type of yogurt (greek for example takes less time to strain), this takes anywhere from 8-24 hours. 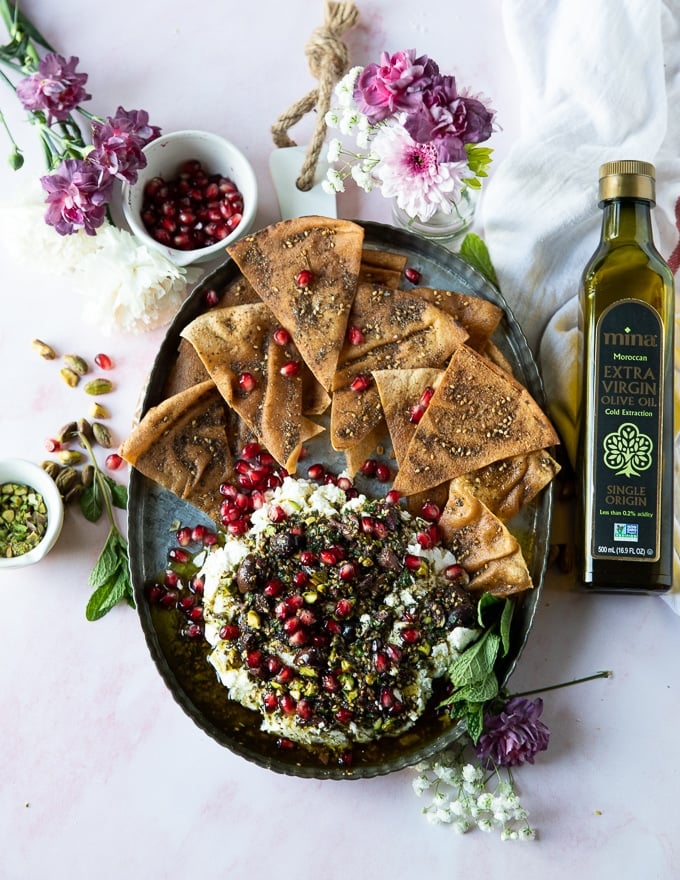 The easies thing to make when you’re out of crackers is Pita chips. They take less than 8 minutes in the oven and come out super crisp super thin and packed with flavor. You can probably flavor the pita chips endlessly, but using zaatar is my favorite way! 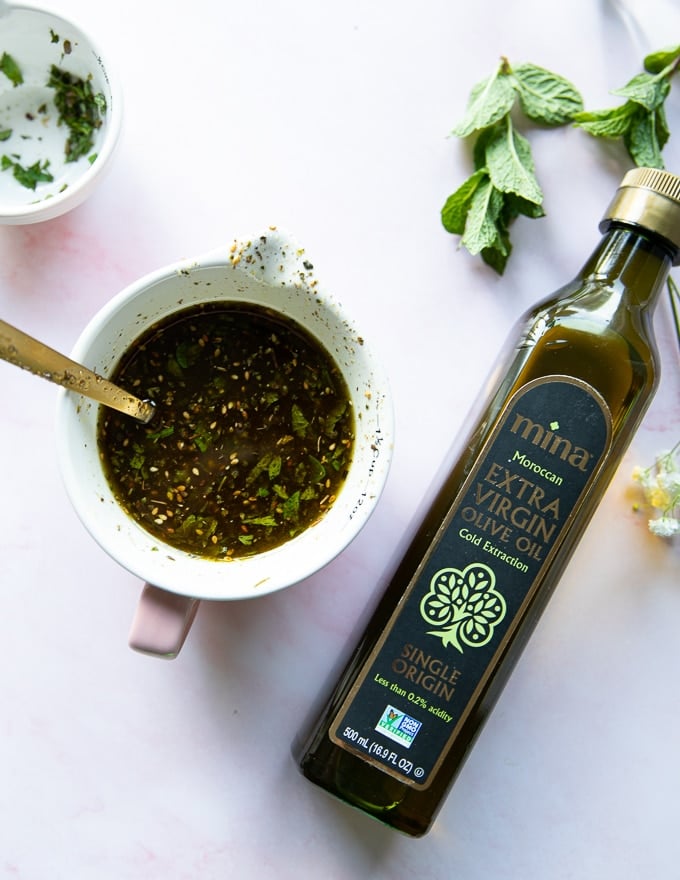 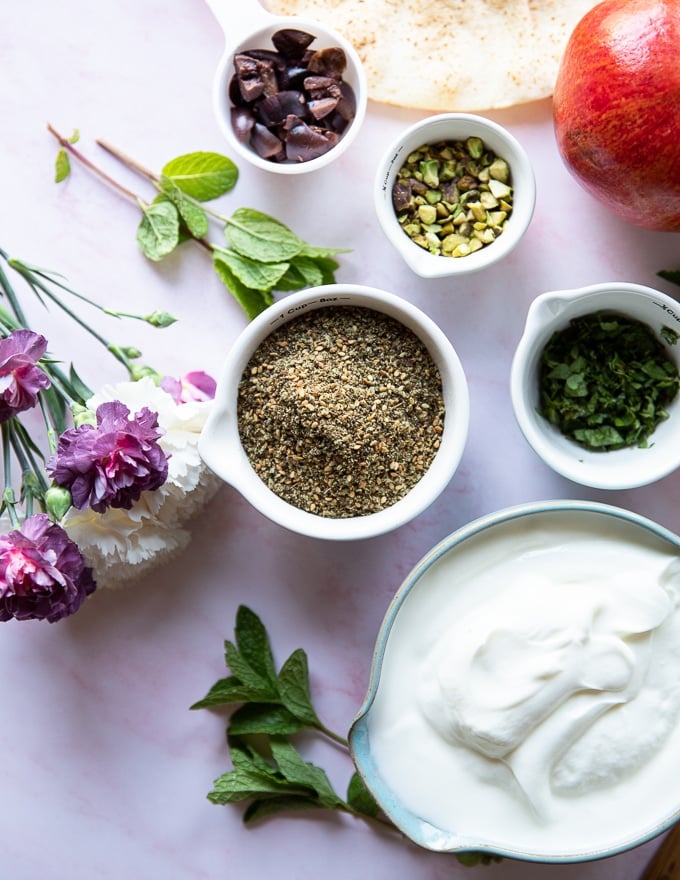 So how about the Zaatar spice? This spice blend is one of my favorites!

These days, you should be able to find it in pretty much every grocery store and definitely in all specialty stores, spice stores and Middle Eastern stores.

I can’t say I would like you to substitute anything for Zaatar in this recipe. If you absolutely MUST, then toast following ingredients in a skillet over low heat:

Toast these spices for about 1.5 mins until fragrant and toasty.

You’ll start bu cutting off your pita chips into wedges.

Best way to do that is to cut each pita bread in half, and then cut each half into three wedges. Another thing is to separate the layers in your pita bread. That way you have paper thin chips. 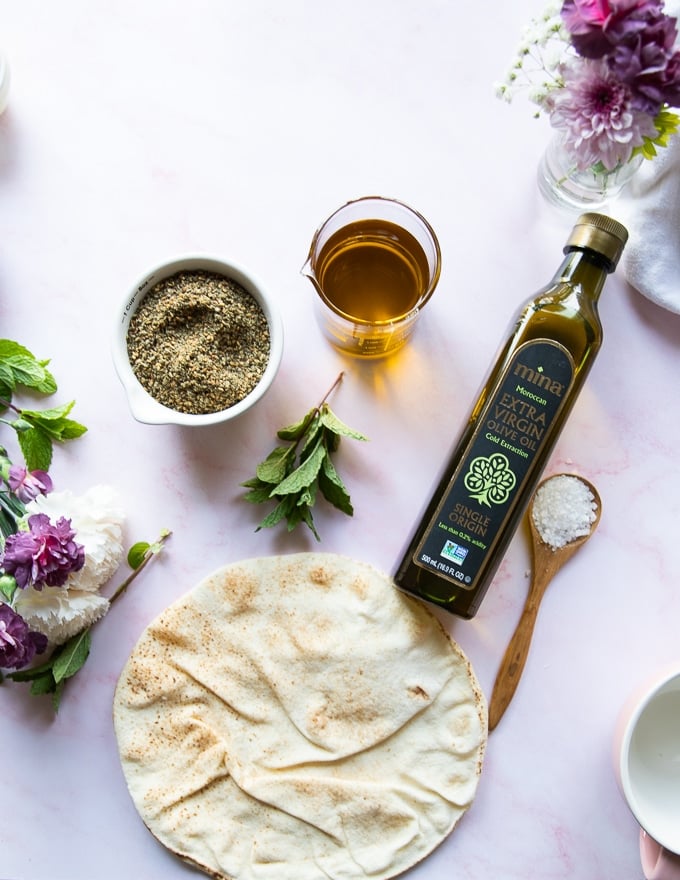 Gather the Moroccan Olive Oil and Zaatar and salt. 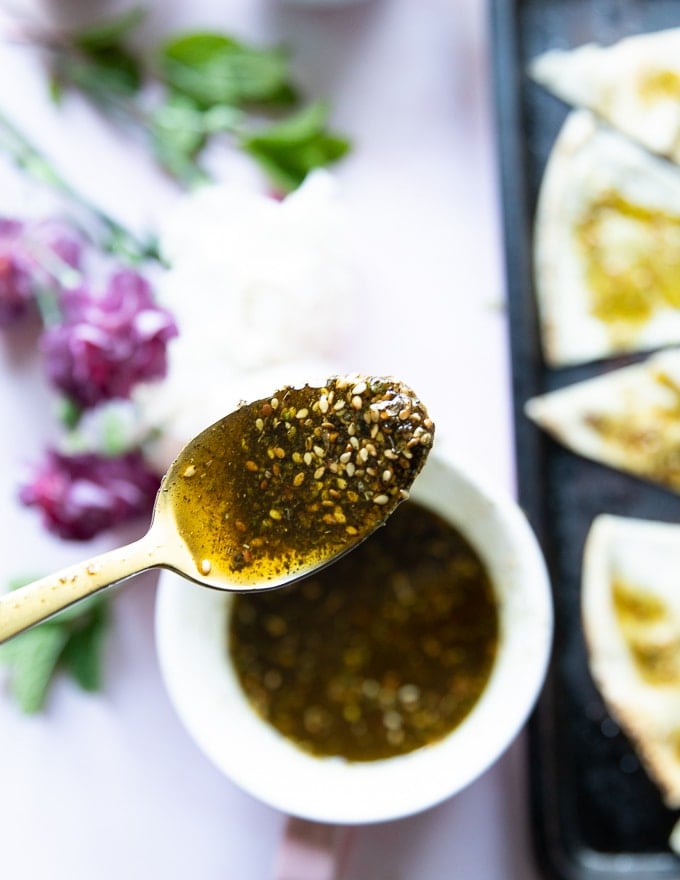 Take a brush and thoroughly brush the chips with a mixture of the Mina Moroccan olive oil and zaatar spice. 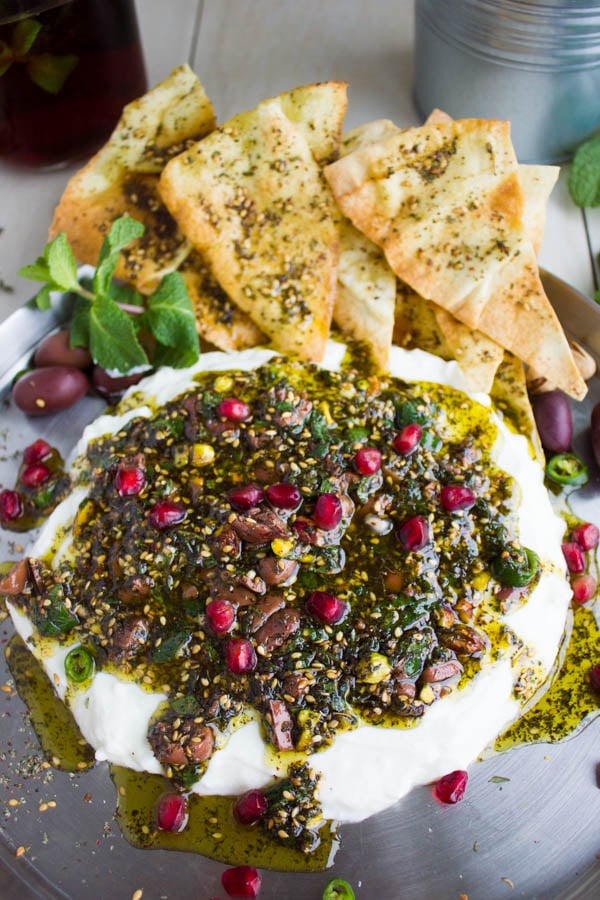 The labneh dip is basically a spread of labneh over a plate that gets loaded with different toppings! 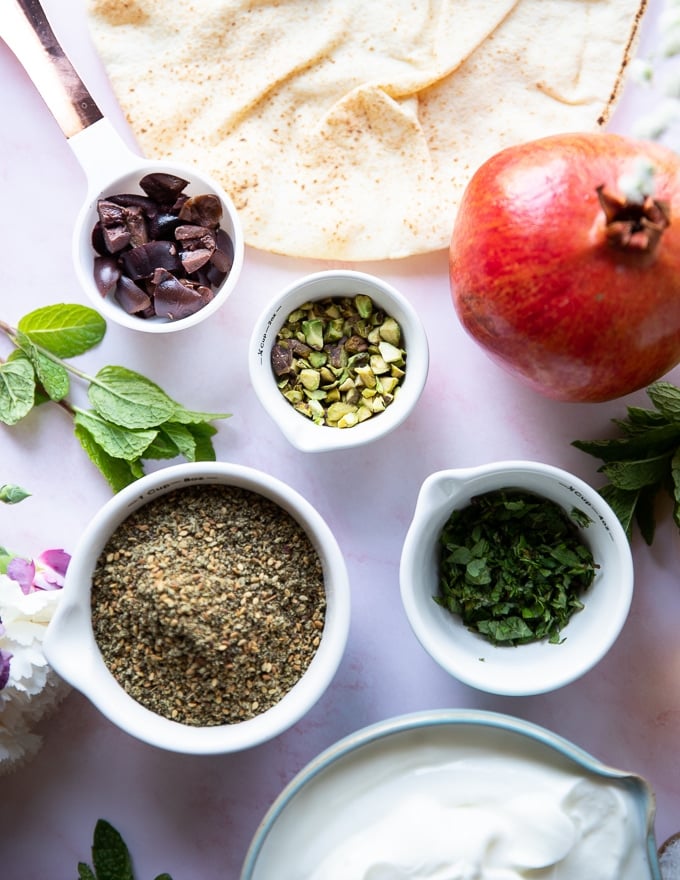 To make life easier, you can absolutely combine the topping ingredients in a food processor. I like to chop them because I love a chunky texture and feel to them. And it really just takes a minute—because you’re not chopping large batches of anything, just a couple of tablespoons of each and they all get chopped up together.

Spread your labneh (or Greek yogurt) on a flat plate mounding the labneh to about an inch high. 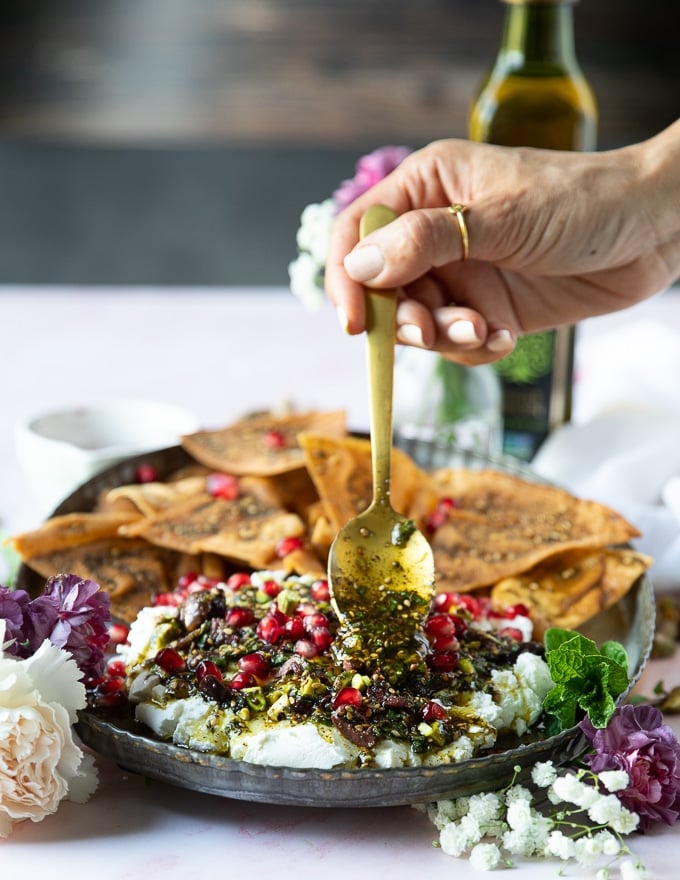 Spoon the topping ingredients over the top of the labneh and allow it to drip from the sides. 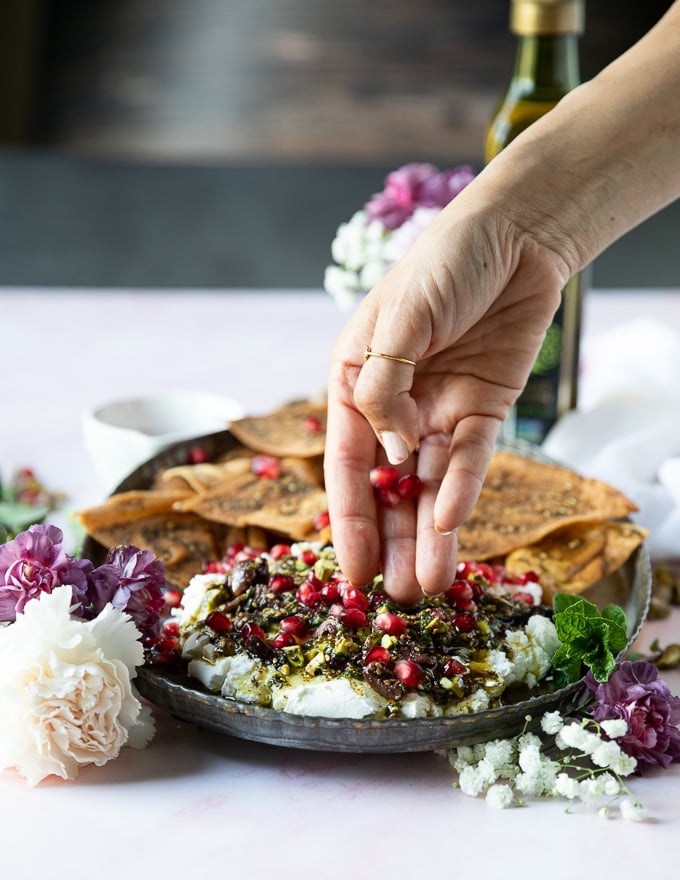 Sprinkle the pomegranate seeds on top. Serve with pita chips.

HOW TO SERVE LABNEH

But there are other ways to enjoy labneh: 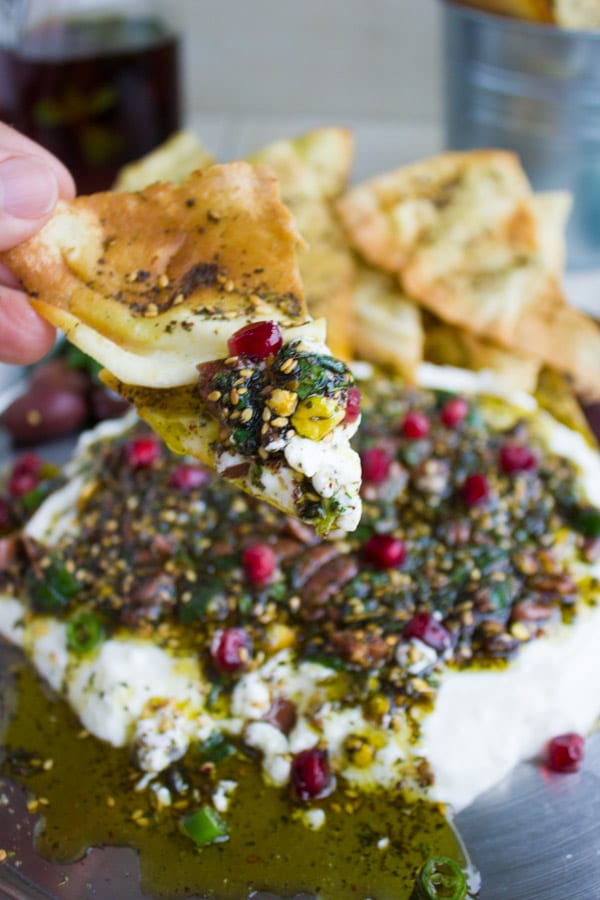 Make this labbneh dip for your game day, potluck, snacks and more!

Some Q&A on Labneh!

What is Labneh made of?

Classically, like all cheeses labneh is made out of cooking milk and straining the it. However you can absolutely make labneh using only yogurt and straining it as well.

What is the difference between Labneh and yogurt?

While some may interchange labneh and Greek yogrut since it’s ultra thick, however they’re not quite the same. Labneh is saltier and tangier in taste. It’s also used savory and never sweet like we may often use yogurt.

Is Labneh good for you?

Labneh is a good source of protein and probiotics so absolutely YES! 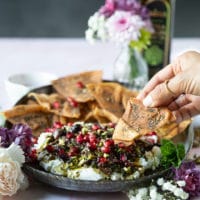 You simply cannot miss out on this Labneh. It's a Labneh Dip with Zaatar Pistachio Mint Olive Topping! Sprinkled with fresh pomegranate seeds and served with pita chips - this easy labneh recipe is the perfect appetizer or can be served as part of a mezze platter drenched in Moroccan Olive Oil.

For the Zaatar Pita Chips: