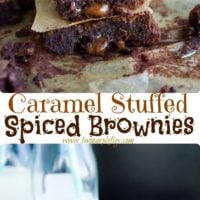 This Caramel Stuffed Spiced Brownies recipe is as every bit as intriguing and decadent as it sounds. Picture a cayenne-spiced, fudgy brownie with loads of golden caramel oozing out of every bite! 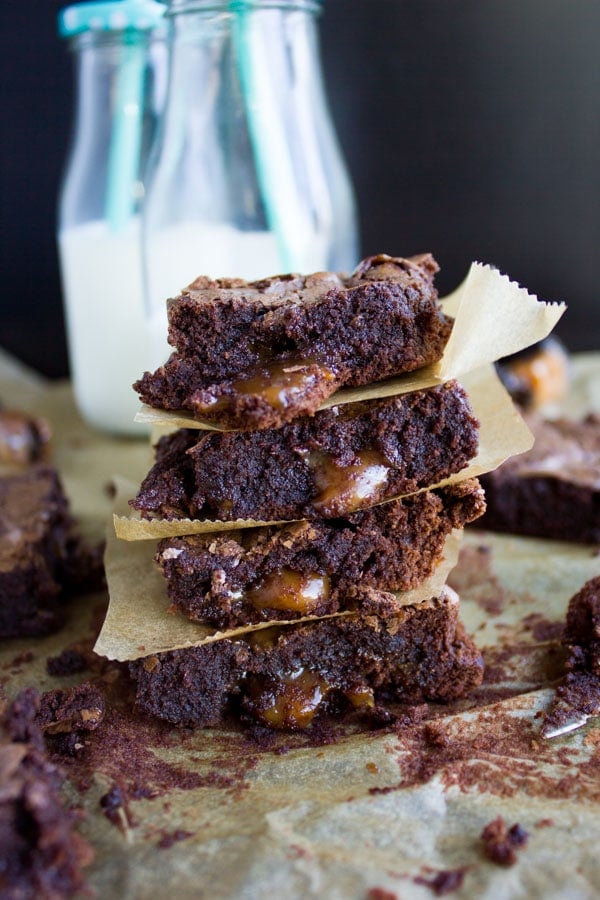 Do you remember these super loaded fudgy brownies? They’re super chocolatey, dense, fudgy and magically gluten-free brownies loaded with hazelnuts, chocolate chips and raisins—they’re a must try-  recipe too!! They’re like the perfect brownies base recipe.

Can we talk some brownies before January kicks in and all we can think of is salads or sugar free everything? Nothing like a last minute cheat! And nothing like ending a year, or beginning a new one on a sweet note 🙂

These Caramel Stuffed Spiced Brownies are a version adapted from that perfect brownie base recipe, only spiced up a little, and infused with oozing caramel!

Why this brownie recipe works:

It’s no secret that anything tastes better with chocolate. The secret here is, cayenne spice can make chocolate taste BETTER!! You’ll taste a strong, deep chocolate flavor with a bit of heat that’s so perfectly rounded off with a sweet smooth vanilla caramel oozing in your mouth with every bite! 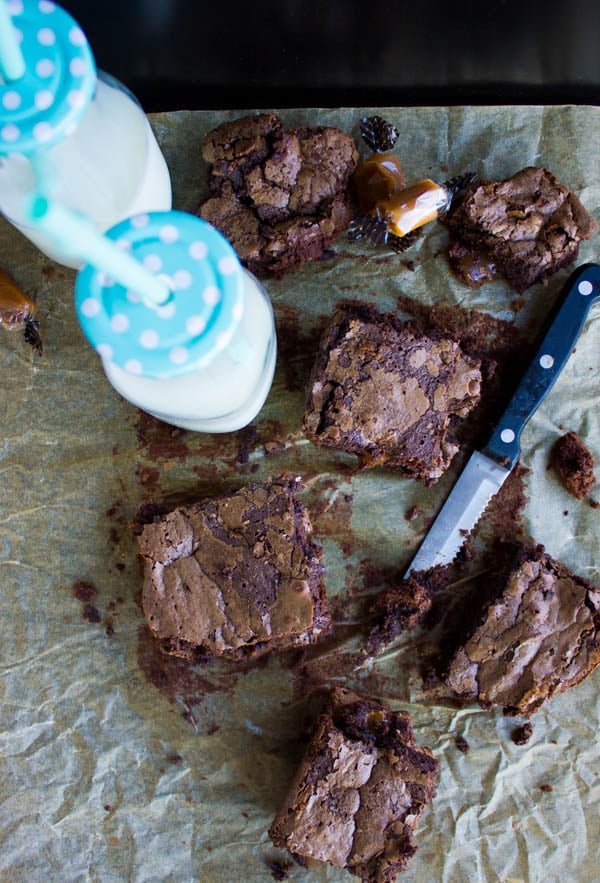 Let me stress again, the spice is really optional for these Caramel Stuffed Spiced Brownies, but very recommended! It’s just a pinch and it’s a miracle how it elevates the chocolate flavor. Also, it really cuts down the sweetness of the caramel.

If you’ve ever had Mexican hot chocolate before, you’ll totally relate to this. It’s basically a nice hot chocolate spiked with cayenne pepper and cinnamon, which in turn spikes up your taste buds in a fascinating way! 🙂 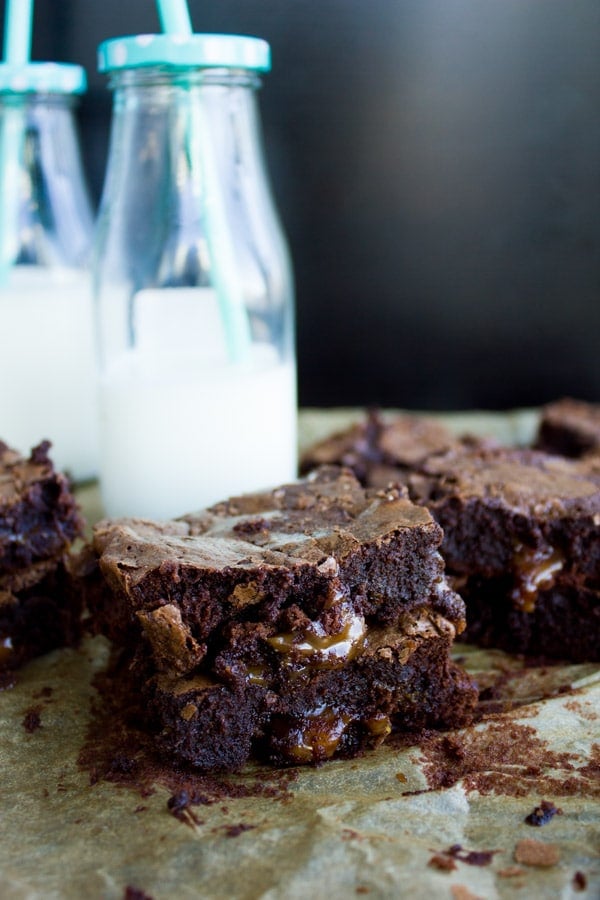 How to make Brownie Recipe:

This brownie recipe comes together using a bowl and whisk. It starts by melting some chocolate chips, butter and oil in a microwave (the oil adds plenty of fudgy chewy character to your brownies while the butter adds the richness and flavor you want).

Then the eggs go in, along with some sugar, a tiny bit of flour (use gluten-free oat flour for a gluten-free Caramel Stuffed Spiced Brownie), a pinch of salt and spice,  and that’s it! Spread the batter in a parchment lined 8-inch square pan. 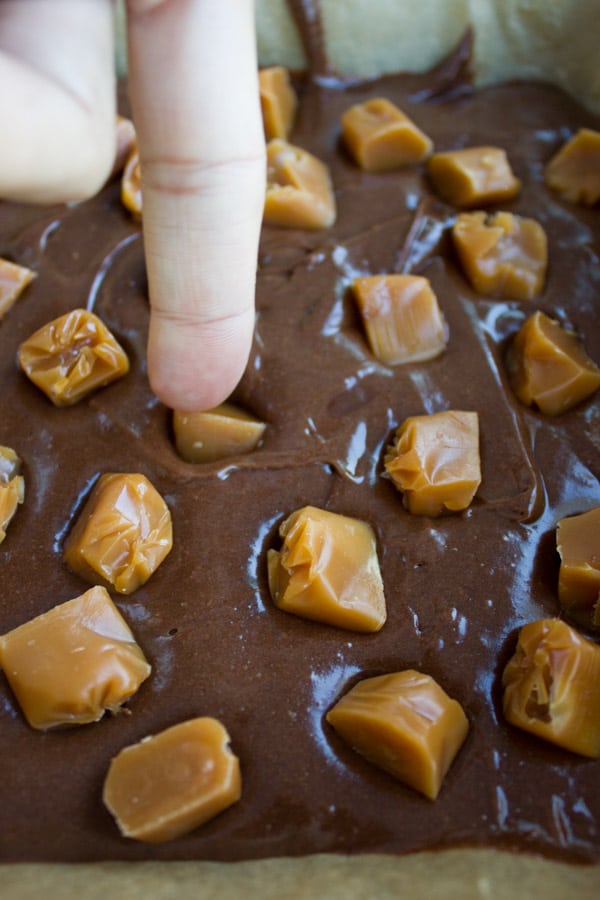 Now for the caramel: If using store-bought caramels, scatter the chunks of caramel on top of the spiced brownie batter and push them in gently. As the Caramel Stuffed Spiced Brownies bake, the caramels will sink in eventually.

If you’re using the homemade caramel sauce recipe, dollop a teaspoon at a time of caramel and push the dollop into the batter nearly all the way. 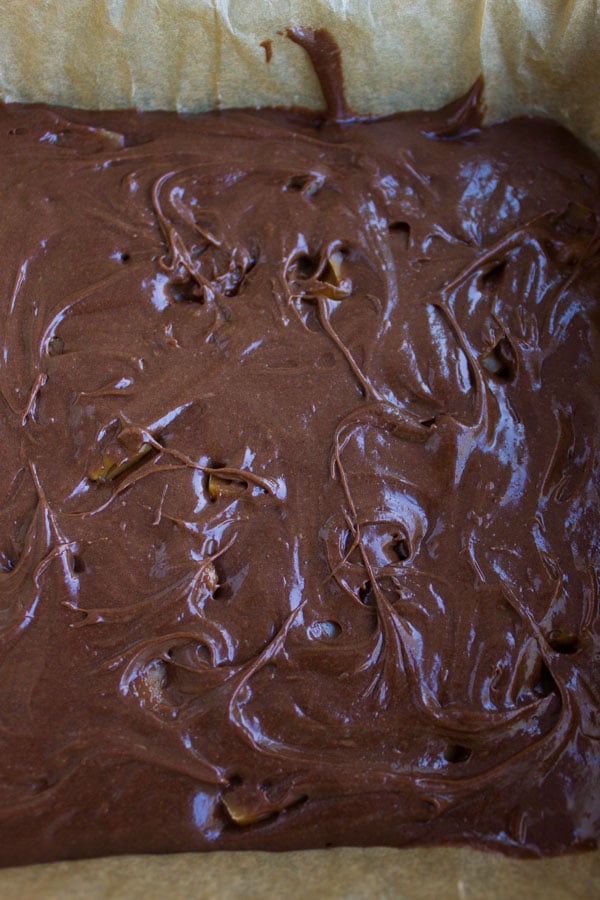 Bake the Caramel Stuffed Spiced Brownies for 20 mins . Then, wait patiently for the brownies to cool down (about 10-15 mins) before cutting and devouring them!

Remember the caramel will be hot, so waiting before biting into these homemade brownies is a must 🙂 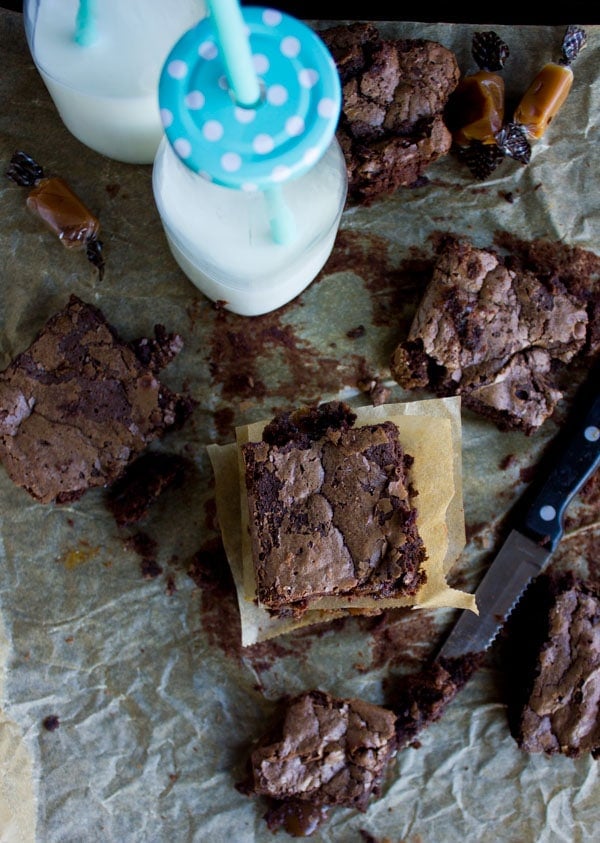 Ok, serious brownie lovers! I will leave you with these seriously DIVINE Caramel Stuffed Spiced Brownies so you can make them and enjoy! 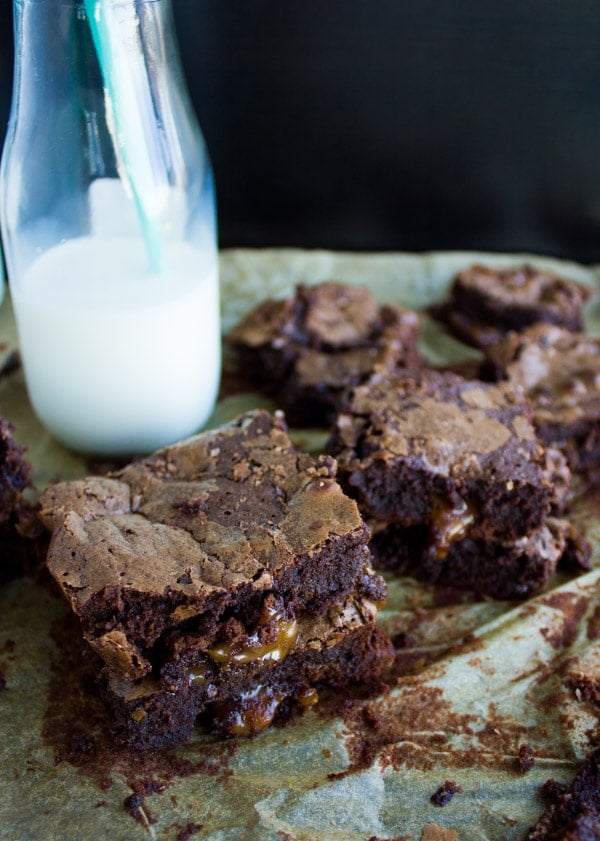 Variations on this brownie recipe: 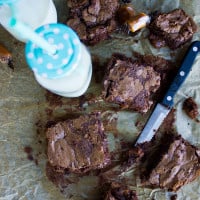 This Caramel Stuffed Spiced Brownies recipe is as every bit as intriguing and decadent as it sounds. Picture a cayenne-spiced, fudgy brownie with loads of golden caramel oozing out of every bite!

For the homemade caramel ( optional) :